River Rouge is a city in Wayne County in the U.S. State of Michigan and an industrial downriver suburb of Detroit. The population was 7,903 at the 2010 census. It is named after River Rouge (or Rouge River from the French "Rouge" meaning red), which flows through a portion of the city into the Detroit River. 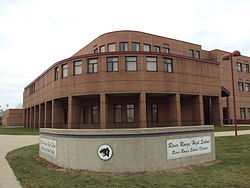